Atiza II, Champion of Spain 1999 (SICAB)
Name: Atiza II
Born: 1992 in Spain
Sire: Binguero
Dam: Indira
Breeder: Solera Bravo
Breed: Purebred Spanish Horse, Pura Raza Española (PRE)
Who is Atiza?
Atiza II is the unforgettable and exceptional PRE stallion and SICAB Champion of Spain that competed on the national Spanish dressage team with Eva Navarro under Jan Bemelmans.
Let's recall for a moment the qualities that this especially talented stallion brought to the sports arena at a time when the PRE was not considered a "real" dressage horse.
Bred in the traditional way in the vast open fields of Extremadura, that arid region on the border with Portugal in Southern Spain, his mother gave birth alone at night under the stars, with the half-wild flock of horses keeping watch from a respectful distance. When venturing out into the fields that morning, Ignacio and Eva from the Solera Bravo stud discovered the newborn. Experienced PRE breeders, they had immediately sensed something special about him, they told us; and as it turned out, destiny did prove them right.
International Grand Prix Champion
With his calm, centered mind, and exceptional mechanics, Atiza II soon proved to be such an unusual talent that he was selected for the Spanish team, under the experienced eye of German trainer Jan Bemelmans.  He spent 15 years competing successfully as an international Grand Prix horse at the Spanish National Dressage team, travelling all around the world together with his rider Eva Navarro.
After retiring from his carreer as a dressage horse, he was then again let loose on the vast fields grass of the Solera Bravo stud farm, to live free there all-year round together with his mares. During this second chapter of his life, he performed as a stud stallion of functional PRE (Pura Raza Española) and CDE (Caballo de Deporte Español) sport horses. He lived happily at the place of his birth until he passed away in 2019 at a high 26 years of age.
Born Under a Lucky Star
During his long, happy and successful life, first as a successful international GP horse and then later as a PRE / CDE stud stallion, Atiza II was exceptionally well cared for by his loving owners at the Solera Bravo stud farm.
Champion of Spain (SICAB 1999)
Atiza II won the SICAB Spanish National Championship in 1999, a testimony to the exceptional quality of the horse.
Atiza II Offsprings
Atiza II has 110 offspring. His most famous son is the International Grand Prix horse and Qualified ("calificado") PRE stud stallion Guardadamas, SICAB Champion of Spain in 2011, and selected for the London Olympic Games 2012 with José Antonio Garcia Mena but due to a last-minute medical emergency they were prevented from participating.
Temperament
Sweet, gracious and noble, a child could ride and handle him; fantastic around dogs and with people.
Bloodlines
– Marín Garcia (movements), Bocado (beauty, grace, class)
– Atiza's father Binguero is of the "Albero II" movement line. Also, that most famously and quintessentially beautiful PRE stallion "Bilbaino III"  of the "old blood" (Bocado) is found on both the father and mother side. 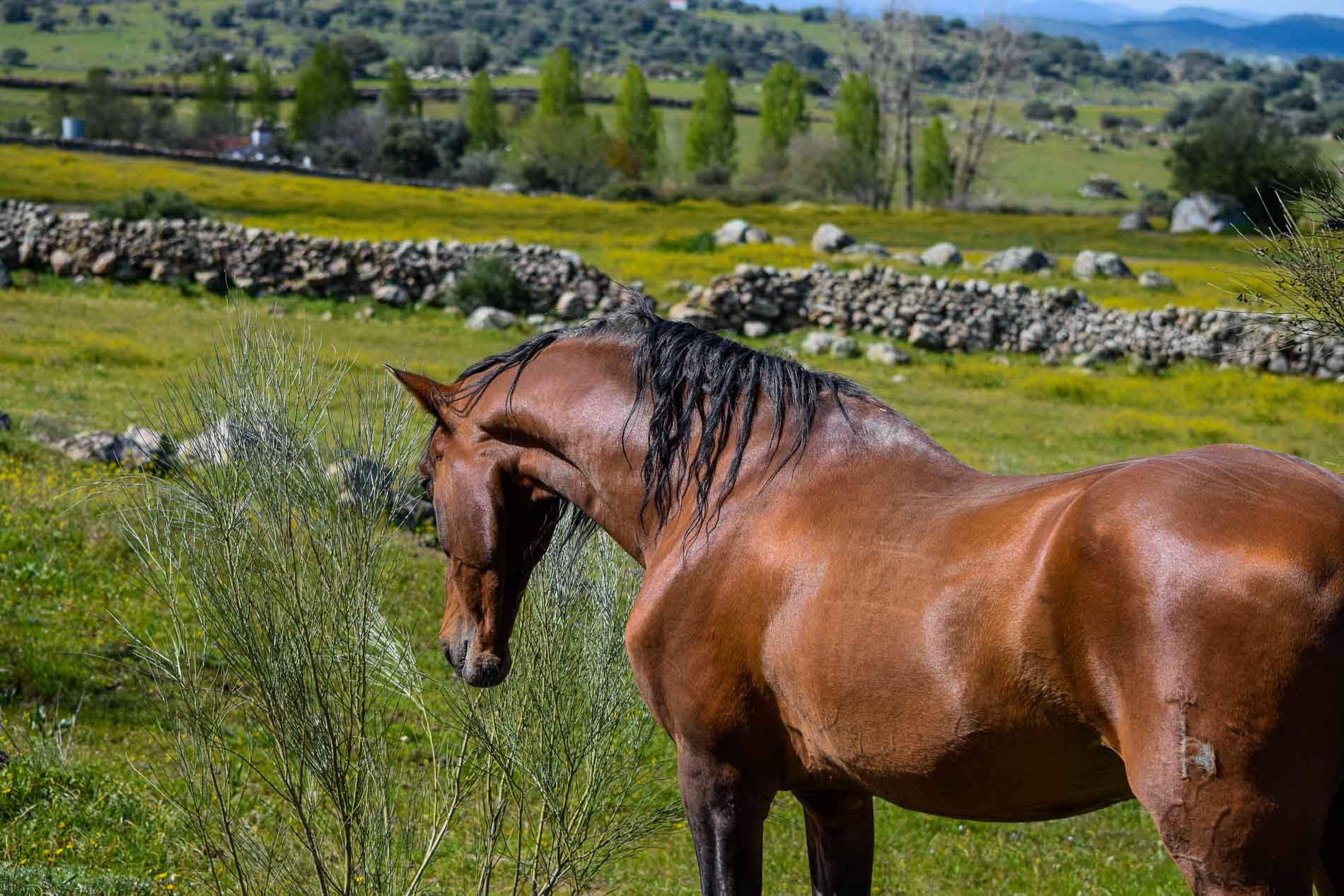 Our Own Atiza Offspring: Farido Real
For one of our top PRE broodmares, the supermover Hiedra VG, we decided to select Atiza to bring some new blood into our lines. Hiedra travelled all the way to Extremadura, Southern Spain, to spend a full year adopting to the lifestyle. She spent this year living free with Atiza II in the open fields.

The result could not have made us happier: Little feisty Farido Real (Atiza II x Hiedra VG) was born in the spring of 2019. We are very much in love his beautiful looks and elastic, suspended movements. The temperament is an engaging combination of fiery, sweet and fearless.
Atiza II passed away in 2018 due to very advanced age, so Farido Real is from that very last generation of PRE foals that this great stallion brought forth.

Condesa Real
↑Back to Top